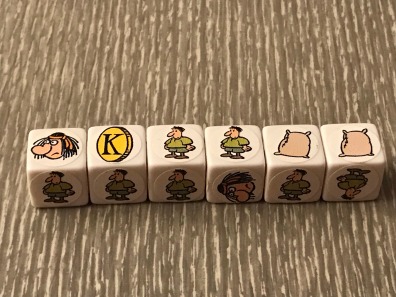 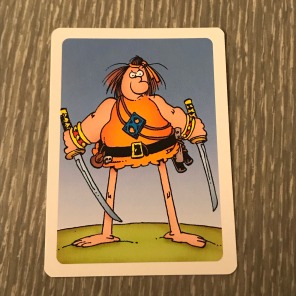 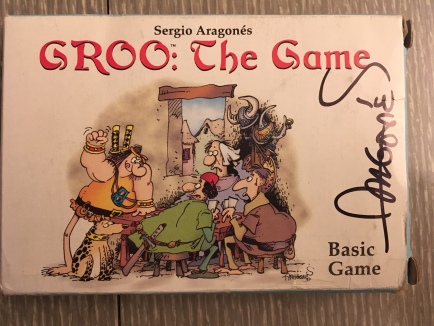 Gist of the game: Players construct towns using resource dice (a la Catan dice game) to build buildings and construct armies. A special die indicates which town Groo, that beloved barbarian buffoon, wanders to each turn. On their turns, players discard, draw back up to 5 cards, optionally launch an attack, role the dice for the construction phase, share any leftovers with other players, and draw back up to 5 cards again. Event cards (that must be played immediately), wild cards, and Groo Effects cards (playable when Groo icons come up on the resource dice, mainly to thwart your opponent) add some additional variety to the game. First player to 7 victory points (obtained through buildings) wins.

Color commentary: I bought this game from the local comic book shop when I was a kid. I would go and buy Groo comics while my sister shopped the Magic: The Gathering selection. It wasn’t until I started dating M that I was informed that in addition to the marginal fame of Groo (variously published by Pacific, Eclipse, Marvel, Image, and Dark Horse), Sergio Aragonés is more notable for his decades-long contribution to MAD Magazine. This particular copy of the game is even more special to us because Sergio Aragonés spoke at Michigan State University a couple years ago, and we were able to get the box autographed (and impress him that we owned the game, and simultaneously disappoint him that we had never played it). This game was for you, Sergio!

M points out that the dominant strategy in Groo, like in Guilotine, is a strictly short-term strategy: make the best move in the moment, and don’t count on it carrying over across turns, certainly not more than one turn. I think the leftover-resource sharing is a neat mechanic, though is probably most beneficial to all players in a two-player game. That said, there’s enough chance in the game between the cards you draw and the dice you roll that there’s not much point in trying to plan ahead. We didn’t use the combat mechanic all that much, though it does provide the opportunity to strip your opponent of victory points. 7 victory points may also be a bit too few, at least in a 2-person game. We had plenty of cards left over (and have the expansion pack, also autographed!), so at least with just the two of us, there’s no real reason not to go up to 10 points and extend game play a bit.

While nostalgia may be a fairly large reason for my enjoyment of the game, it’s just complicated enough to stay interesting but simple enough to be true leisure. And no matter how simple the game, it will always be infinitely more complex than the inner-workings of Groo’s brain.