Design a site like this with WordPress.com
Get started
Skip to content
Petra Hendrickson Uncategorized April 1, 2020 4 Minutes 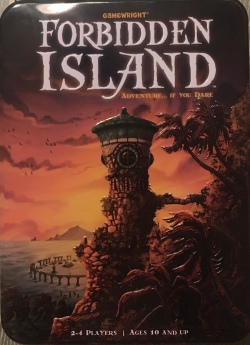 Gist of the game: You and your team arrive on a previously undiscovered retreat from the ancient mystical Achaen empire. The Achaens kept four treasures thought to be able to control the elements hidden on the island. Inconveniently for you, the Achaens also designed the island to sink if anyone tried to reclaim them. Shockingly, the arrival of your team marks the first time anyone has tried.

In this cooperative game, you and your fellow adventurers must work together to both pillage the treasures and keep the island from sinking. Or, at least, sinking before you can leave, because once you have all 4 treasures, you have to make it back to the helicopter pad and play a card to lift off.

To play, you first create a randomized island by placing the 24 tiles in a 4×4 grid with an extra two cards placed along each side (so that top to bottom, the island has 2-4-6-6-4-2 tiles in each row). There are two tiles for each treasure on which the treasure can be claimed.

The island begins sinking immediately upon your arrival, with the top 6 cards of the flood deck (each tile has a corresponding card in the flood deck) being flooded before the game even begins. The beginning water level is set according to the desired difficulty. The flood deck also contains 3 cards that cause the water to rise one tick mark. Because the deck is fairly small, though, you will cycle through it multiple times, thereby increasing your water total more than 3 times.

Each player has the role of a specific adventurer (explorer, pilot, engineer, diver, messenger, navigator), and receives a color-coordinated pawn that is likewise placed on a corresponding tile.

On each turn, a player takes up to three actions. Players can move to adjacent tiles; shore up adjacent tiles, which means flipping them from a flooded stage back to an unflooded stage; giving a treasure card to a player on the same tile as you; and capturing a treasure by discarding 4 matching treasure cards on one of that treasure’s 2 associated tiles. After taking their maximum of  3 actions, players draw 2 treasure cards, and then draw a number of flood cards equal to the water level (rounded down to whole number), flooding locations or removing already-flooded locations from the game completely.

When a player draws a card raising the water level, the tick mark is advanced, and the discarded flood cards are shuffled back onto the top of the flood deck, re-threatening places that may still be flooded.

To win, players must capture all 4 treasures, make it back to the launch pad, and take off. There are 4 ways to lose: if both treasure tiles sink before you can capture a treasure; if the launch pad tile sinks; if a player is on a tile that sinks and there is no adjacent tile to move to; and if the water level reaches the skull and crossbones.

Color commentary: This was a fun, breezy game. It was easy to master, and to develop a pretty sound strategy. Because you can only have 5 cards in your hand at any given time, we decided to each focus on a treasure and swap cards as needed to get us to 4 of that card. I drew the helicopter take-off card early on, so I kept that on hand so we’d have it when we needed it, as opposed to having all  the treasures and not being able to leave even after making it back to the launch pad.

Shuffling the discarded flood cards back onto the top of the flood deck has a Pandemicy feeling, although the fact that cards get removed when their accompanying tile sinks means that you do go through more of the cards than we did in Pandemic. We lost a number of tiles, and the launch pad kept flooding, but our last treasure had a tile right by the launch pad, so we were close at hand to constantly shore it up immediately after it flooded. Which was lucky, because the launch pad was on one of the 2-edges, so well only had one path to get there. Micah was the diver, which would have let him move across missing tiles, but I had no such ability, and would been stuck without a way to get back to the launch pad.

We won, with the water level one tick below 4, having drawn a total of 5 Waters Rise cards. I’ve really been enjoying the cooperative games we’ve been playing, which makes me more convinced that Hanabi is coincidentally an awful game, and not indicative of cooperative games in general. But since it was the first cooperative game I had played, I had no way to know that, and it nearly poisoned an entire game medium for me. Fortunately there was a period where I was buying games pretty indiscriminately without regard to the minimum number of players needed or mechanics, so we had a number of cooperative games on hand anyway. If I had been more strategic about my purchases, Hanabi might have prevented me from buying more cooperative games. I shudder at the alternate reality in which we never played another cooperative game.

Thoughts from M: This was a very fun game that seemed a lot more complicated initially than it was after you actually got playing (Petra here: I think this might be in part because we sat in silence for like 20 minutes while I summarized the directions for this post before I started to explain how to play). There’s a very basic strategy, with each person trying to collect one prize at a time and assisting the other players with their prize, before moving on to the next prize. Because cards are played open-handed, it’s very easy to see how to assist them (Petra here: plus, you know, talking to each other). So: not especially complicated but a lot of fun. The artwork was ok. The best part of the art was probably the treasure figurines. The griffon especially was pretty great.