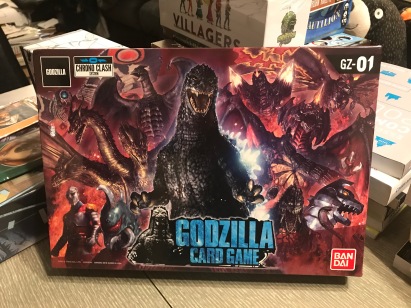 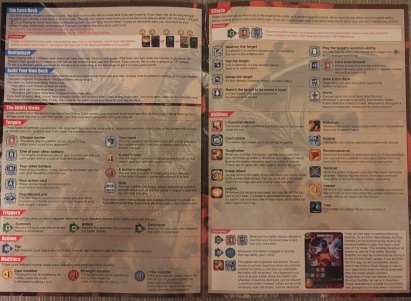 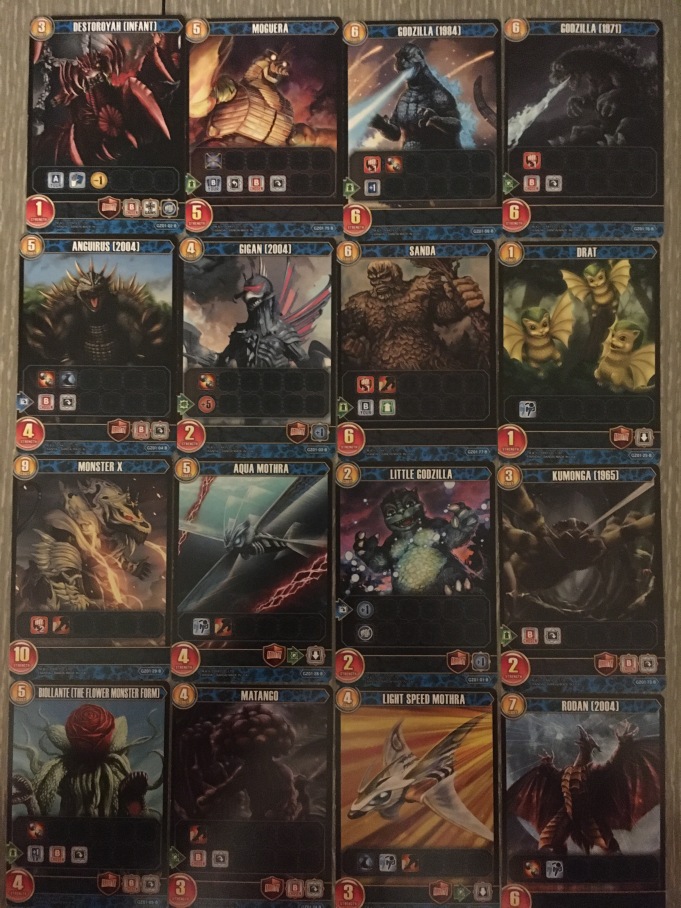 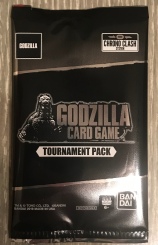 Gist of the game: Using various characters from the Godzilla universe and action cards with “devastating effects,” be the first player to complete 5 quests or the last player to not be eliminated to win. You start the game with 5 “guardians,” and can lose the game by not having a guardian available when you need one and not having any cards left in your deck when you need to draw one.

Once players have their deck constructed (more on this below), they place the top 5 cards from their deck into a guardian pile, and take 5 cards into their hands. A token is placed on the “0” mark of the 21-point “Chrono Clash” counter (10 spots for player 1, 10 spots for player 2, plus a 0).

On their turn, players proceed through the following phases: untap any tapped cards, draw one card from their deck, and engage in a number of actions during the main phase of their turn. A player’s turn ends when the Chrono Clash Counter ends on the one spot or higher of their opponent’s side of the scale. This occurs by paying the “costs” of a card in order to “summon” that card. During the main phase of the turn, players may summon a battler card (Godzilla universe character) from their hand by paying the cost by moving the token on the Counter, play an action card by paying the cost, attacking an opponent’s tapped battler or guardian (tapping the battler and announcing the target), send a battler on a quest (tapping the battler and placing a card from the hand facedown on the battler. The facedown card then functions as a guardian for that battler, and if it is still there at the start of the player’s next turn, they gain 1 quest point), and activate a tap ability (I’m not sure what these are — I don’t think any of our cards had them). Battlers cannot be tapped/used on the same turn they are summoned unless they are summoned via sneak attack.

When a battler chooses to fight another tapped battler, the battler with the higher strength wins and the loser is discarded by its owner. If a battler fights a guardian (the opponent reveals the top card of their guardian pile), the guardian is always discarded, but the attacking battler is retained if its strength is greater than the guardian’s strength.

Every card has a series of icons to tell you how to play the card’s effects and abilities. Take Fairy Mothra, for example.

Fairy Mothra costs 3 spots on the Chrono Clash Counter to summon (Let’s say a player wants to summon Fairy Mothra on their first turn. They pay the cost by moving the Counter 3 in the direction of their opponent and their turn ends because it has passed their opponent’s 1 spot). It has a strength of 1, which won’t really be good for much in a real battle. If you wanted to pay a cost of only 2 (the mouth with a 2 on it), you could use Mothra’s sneak attack ability. In that case, Mothra would then attack immediately and then be discarded, regardless of the outcome of the battle. Mothra also has elusive ability (the running person icon), meaning that it can only be attacked by battlers that are also elusive. When it attacks (the green explosion arrow), the player chooses a battler (one of their own or an opponent’s) with a cost of 3 or more to destroy. Fairy Mothra also has a guardian ability, which is to choose a battler with a cost of 4 or more to destroy.

Color commentary: Today is M’s birthday, so I moved Godzilla up in the queue as a special surprise. Happy birthday, M!

Although we each just chose one of the color decks (M played with blue, I played with green), you also have the option of building your own deck. Each deck must have at least 50 cards, no more than 2 colors (green, red, blue, purple), and no more than 3 of any given card. There is also an optional jumbo deck you can play with, but it seemed confusing and we didn’t experiment with the jumbo deck in either of these games.

The icons probably make multilingual play easier (there were instruction booklets in 4 languages), but they were a little overwhelming at first because most of them can’t give quite enough information in the very small size they are allotted.

It seems like the most logical strategy is to eliminate your opponent by destroying all their guardians, unless you maybe make a pact not to, in which case you could focus more on quest points and fighting other battlers, which might be more interesting. Even in a 3 or 4 player game, it seems like eliminating opponents by attacking all their guardians would still be the dominant strategy, though you might form temporary (informal) alliances to knock out other players, like sometimes happens in Risk, for example. In these cases, maybe quest points would become more of a factor because you could balance between attacking guardians and doing other things.

I won game 1, in part because I got monsters out quicker and one of my battlers summoned additional guardians on each guardian attack, which meant M’s guardian pile diminished even more quickly than it would have if each battler had been limited to one guardian. I also had 1 quest point as the result of a fleeting experiment that went nowhere.

In game 2, M came right out of the gate with Monster X, which had a strength of 10 and the ability to take out 3 guardians at a time. The only thing that allowed me to cling desperately to life was that one of my guardians destroyed a battler of my choice with a strength of 3 or more when it got destroyed, which I used to take out Monster X. There were a few turns where neither of us had any guardians or any monsters and we were forced to start re-building our battlefield. M was the player 1 in this round, giving him the time advantage, and he won.

The box estimates that games will take about 30 minutes, but because of the guardians-only strategy we used, I think we played both games in well under that, even with repeatedly needing to look at the instruction manual to decode icons.

Thoughts from M: This is another game where I think the 2-player version leads to much more aggressive strategies than might be played in a game with 3 or 4 players.

I don’t think there’s necessarily a lot of strategy during game play itself, but you do have to be conscious of the order you do things in because your turn is over as soon as the counter moves to the 1 position of the other person’s half of the Counter.

There’s probably a fair amount of strategy in you’re constructing your own deck. Interestingly, you could not play with a purple-only deck, because there are only 33 purple cards. This doesn’t really make sense to me — why not have 4 ready-made decks people can play for an easy-start 4 player game?