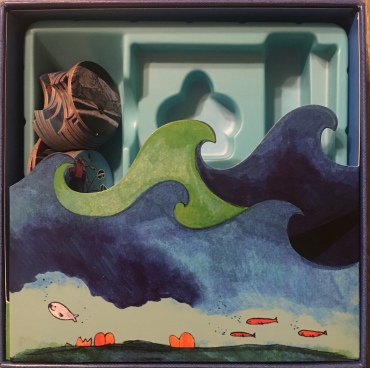 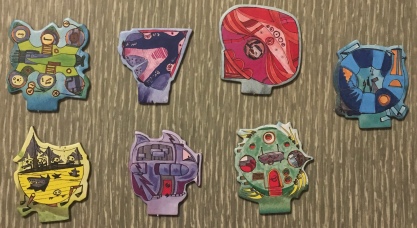 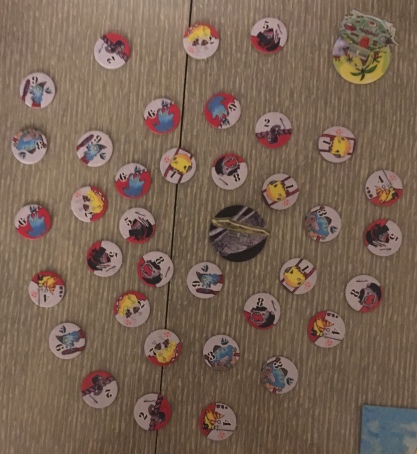 Gist of the game: This game can be played with 1 player or as a 2-player cooperative game. It also comes with 5 expansions built in, which I’ll touch on below.

The villainous Darkhouse has sent their Phantom Submarine to capture the Happy Isles. You are the captain of a Nautilion submarine, and seek to infiltrate the Darkhouse’s base in the Abyss.

To set up, shuffle and place the 36 numbered (1-9) crew tokens in a path pattern of your choice. The instructions show a spiral and I started with a spiral (above), but it was too tight and I was moving to incorrect places and scrapped it for a clearer path design that will be shown below. Once you have the path placed, put the Abyss token at one end and the Happy Isles token at the other. Each token is a step of the journey. Choose a Nautilion submarine and one of its accompanying boards (each sub has 2 corresponding boards). Place the Grimoire card (which tells you how to use reserve tokens) and 4 reserve tokens in front of you. Place the Phantom Submarine on the Abyss token and the Darkhouse figure on the Darkhouse card, off to the side. Your Nautilion starts on the Happy Isles token.

The game advances based on dice resolution. If the Darkhouse die is a 3 or 4, you must discard a token, either from your crew or from your reserves. If you don’t have any tokens, though, nothing happens, but you probably won’t win the game.

Move the Nautilion toward the Abyss the number of spaces reflected on the die and take that token. From here, you can place your token in your Nautilion following placement rules (you can only play tokens in adjacent places once the first token is placed) or place the token face down in your reserve. When passing the Phantom, do not count its space toward the number of spaces you are moving. If you reach the Abyss with a full crew of 9 in their appropriately numbered berths, you win. Otherwise, you lose.

Color commentary: The artwork on this game feels like whimsical Jean-Michel Basquiat, which was unexpected and a little disconcerting. At a minimum, it’s not what I would describe as “conventional” board game artwork.

On my 1st roll in my 1st game, I rolled a 1, 2, 2. I gave a 2 to the Darkhouse and myself and a 1 to the Phantom. The Phantom moves one space and discards that token. I move two spaces and pick up the 5 token. On the next turn, I need a 2, 4, 6, or 8 token to be able to play it on my Nautilion board. The 5 token touches the most other spots (the other numbers touch only 2 or 3 other token values). On my next roll, my non-Darkhouse dice options are 2 tokens I can’t play (one of which is a 5), so will go in my reserve. Halfway through I realized that there were no more 1 tokens left, so I had already lost. I rolled a lot of triples, which didn’t allow for much strategic token taking.

Likewise, halfway through the second game all the 2 tokens were gone and I had already lost below). Needless to say, these games were not taking anywhere near 30 minutes.

Thoughts M might have had if he had played: There’s definite strategy in allocating the dice (and maybe even sacrificing a token), but there’s also a huge luck component in the distribution of the tokens along the path. To have lost halfway through 2 consecutive games because particular tile values were already exhausted was disappointing. It was a fun and lively game overall, though, and maybe playing with multiple expansions at once would change the dynamics sufficiently that you’d be less likely to lose halfway through (P here: see below for bonus descriptions of the expansions).

Bonus content! Descriptions of the expansions, which can be played with one another in any combination:

Expansion 1: The Mages
Increases the path size by 9, but also requires you to acquire and place tokens labeled A, B, and C in the Mage’s cabin (i.e., board), in addition to the 9 numbered tokens you already need to acquire for your Nautilion.

Expansion 2: The Mercenaries
The size of the path increases by 9, and the Phantom can also acquire tokens. Additionally, instead of simply passing one another, the Phantom and the Nautilion collide and there is “combat” based on a comparison of the number of harpoons each vessel has (the 2, 5, and 8 tiles depict harpoons as part of their illustrations). If the Phantom has more harpoons, you lose the game immediately. If there’s a tie or the Nautilion has more harpoons, all the tokens on the Phantom’s board are discarded, that board is put away, mercenary tokens on the Nautilion are discarded, and one discarded token is placed in the reserve.

Expansion 3: The Reefs
Adds reef tokens (extras if you play this expansion by itself, enough to play with both Expansions 1 and 2 as well) adjacent to regular tokens alongside the path. If the Phantom ends its movement next to a reef, the reef is discarded along with its accompanying token. If the Nautilion ends its turn next to a reef there is a die roll before Phase 1 of a turn, which may impact whether the Nautilion moves at all on that turn.

Expansion 5: Heroic Actions
Add the Heroic Actions cards to the game. You begin the game by revealing 3 cards with a deck of an additional 9. After you roll the dice in Phase 1 of the turn, you may play 1 or more of the revealed Heroic Action cards, but for each one you play, you must discard a token from the Nautilion. Additionally, to win, you must have all 9 crew and no revealed Heroic Action cards. Although it doesn’t say, my guess is that you don’t reveal a new Heroic Actions for each one you play, so why you need the extra 9 cards on standby is unclear. Nonetheless, playing with these cards requires a commitment to discarding 3 tokens from your Nautilion. Since I already can’t win a game because certain tokens run out too quickly, I don’t think I’d want to commit to getting rid of even more.