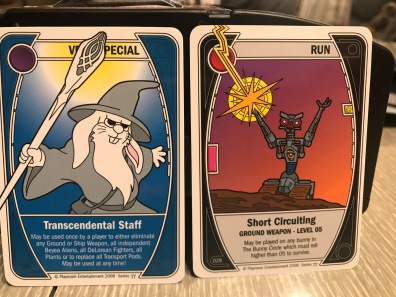 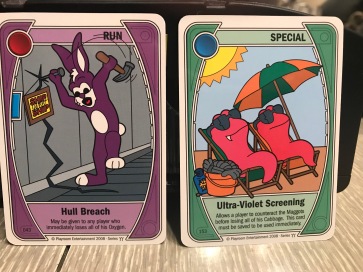 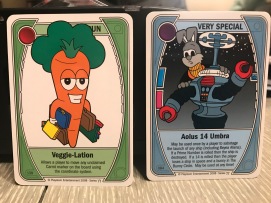 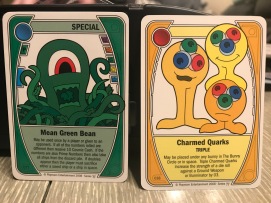 Gist of the game:  In this game, players compete to end up with the most points, accumulated through having bunnies in space, big carrot cards, and perhaps even the “magic” carrot (worth more points than regular carrot cards). To that end, you have two goals guiding you throughout the game. The first is to keep as many of your bunnies alive as possible while eliminating as many of your opponents’ bunnies as possible. To be in the running to win, you must have at least one bunny alive in space when the game ends. Second, you want to launch your bunnies into space and have them explore the solar system while collecting carrot tokens, which they can cash in for carrot cards by docking with Jupiter.

You start the game by setting aside the first two turns’ cards face down in “runs.” On each turn, you play the “top run” card, shift the bottom run card to replace it, draw a card from the deck, and then replace the “bottom run” card. So you’re always planning two steps ahead.

There are options for making the game more and less complex. We played the least complex version each time, where carrot tokens are placed in particular, specified places and the game ends when the last token is collected. There are mechanisms for the carrot tokens to be placed randomly across the board and for all tokens to be converted into cards by docking with Jupiter.

Ideally, players get bunnies and spaceships early on, allowing them to launch bunnies into space fairly quickly. Other cards include ground weapons, which can target bunnies that have not yet been launched into space, cards that may target either ground bunnies or space bunnies by requiring that they be given particular resources (or they get discarded), etc. Each spaceship has a little standee that goes on the board and gets moved around. Movement is based on dice, and which die you use is based on matching cards, features, add-ons, etc. of your ships and bunnies. There are mechanics for combat, which occurs when players occupy adjacent hexes on the board. The board is pretty substantial — it took up most of our table — and is divided into hundreds if not thousands of small hexes.

After each round, move each of the planets (Earth, Mars, and Jupiter) one spot clockwise. Bunnies launch into space from Earth, and to convert carrot tokens to carrot cards you need to sidle up alongside Jupiter. It’s not clear exactly what purpose Mars serves, or Saturn, which comes with the Laser Red expansion (and also includes another board segment with an additional 3 quadrants to add to the 9 on the original game board).

Color commentary: I realize most games are competitive, and that we’ve played mostly competitive games throughout this blog, but I was genuinely surprised to see that this game was competitive. Shouldn’t we all work toward space exploration together? Mostly, though, I think it’s because I’ve been playing games alone that are mostly cooperative if you play with someone else, and we’ve largely been prioritizing cooperative games for the past bit. Anyway.

In the spirit of Easter, we played our first game without any thwarting of any kind — no combat, no requirements to give the bunnies particular resources, etc. This was also due to the fact that the rulebook was lengthy and complicated; eliminating combat seemed like it would help us get the basic mechanics down. Also, the rulebook comes with a supplemental book that includes more detail about various cards that seems like should have been included in the regular instruction manual, because we had been playing particular cards incorrectly, but then the instruction manual would have been even longer, so I don’t really know. But games shouldn’t require you to read 50+ pages to be in a knowledgeable enough position to play. In this first game, we were also lousy about advancing the planet markers, which isn’t really surprising because we’re always terrible at advancing markers, but we did get better at it, and I don’t think we missed doing so on our second play-through.

You can launch as many ships as you want into space (so long as they have at least one bunny on board), but so far as we can tell, you can only move one ship at a time. M pulled a neat move where he figured out where Jupiter was going to be on his next turn, declined to move, and then was in perfect position to exchange his carrot token for a carrot card.

On our second play-through, we opted to allow thwarting, including combat if the opportunity arose. I tried to be aggressive early on, but we also both started the game with a bunny and our ship to be revealed in our first two turns (as recommended for beginner play), so by the time my ground weapon came up on my 3rd turn, M had already launched his bunny into space and the weapon was useless and just had to be discarded. We also killed a lot of bunnies by requiring that they be given particular resources that the other player wasn’t able to provide. I played two of these cards back to back, so M was able to save his bunny on one turn only to watch it die on the next because he spent so much money getting resources for the first go-around. In this way, M lost his last space ship, and went a solid 1/3 or more of the game without any bunnies in space. So even though he had gotten a carrot card and knocked my spaceship with a carrot token out of the game, I still won because he was no longer eligible.

I was also attacked by an alien ship that was brought into play by one of M’s cards (but in theory could have also affected his ships, depending on where the alien ship had ended up through random placement). Overall, I think thwarting cards added a lot to gameplay, but I might not have tried to kill off M’s last bunny in space had I realized he would go the rest of the game without getting another ship. Then again, I’m a sap, and should probably just be glad I was essentially handed victory. Even then, the second game definitely took a solid 90 minutes, and we weren’t even requiring that we exchange tokens for carrot cards — I had just ended up in the hinterland, and getting across the hypotenuse of the board to the other carrot token took a long time when I was just rolling a single d6 die at a time.

The artwork was pretty fun, and there were a lot of insidey jokes on the cards. For instance, with our decks/expansions, we have 10 carrots. Carrot 7 is named Jeri and looks like a Borg (Jeri Ryan played the Borg 7 of 9. Get it? Huh? HUH?!).

Thoughts from M: The artwork is tremendous. On the first round, the game was very confusing when described in the abstract, but made a lot more sense when put into practice. But. It was a very, very long instruction manual. The planets moving around was a neat dynamic, and could create some interesting strategies on where to position your ships and which ships to move on particular turns to intercept Jupiter with the least hassle.

In terms of playing with 3 different decks combined (the base game came with 2 decks and we added the 3rd, red expansion deck), it may ultimately be problematic because droughts of particular card types can be really, really long. So long.

Playing 2 turns ahead is interesting, because of the possibility of intervening events to negate a card you’ve played (like a card relying on bunnies being in specific places).

Unlike in some games, good luck is going to beat a good strategy every time. And even things involving random alien attacks on opponents may be worse than the status quo, so you have to weigh the status quo against a variety of possible alternatives.

Even though the second game ended up being less fun because of not being able to draw another ship, I do think that playing with thwarting cards made the game a lot more dynamic, fun, and interesting (in general. Not necessarily in practice, such as in the 2nd game).

One thought on “Killer Bunnies and the Journey to Jupiter (Playroom Entertainment, 2008)”