Design a site like this with WordPress.com
Get started
Skip to content
Petra Hendrickson Uncategorized April 22, 2020 6 Minutes 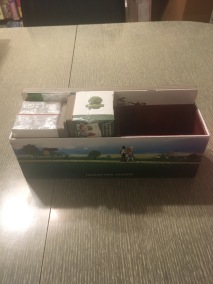 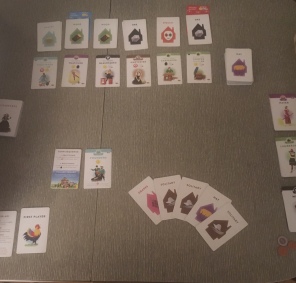 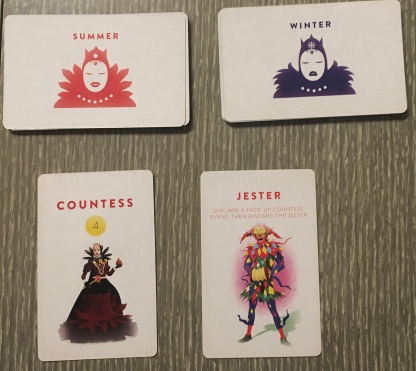 Gist of the game: You are founding a new, post-plague (accidentally timely) Middle Ages village. Because of the plague’s destruction, you’re facing some real labor shortages. Down-on-their-luck refugees (ok, this is getting a little uncomfortable) come flocking to your villages because you have a steady grain supply capable of feeding a growing population. Your task is to use these new potential residents to the village’s benefit. To succeed, you need to find villagers whose skills are compatible with your existing entrepreneurs while simultaneously increasing the food supply and the ability to build new dwellings in town.

In 2-5 player games, the player with the most gold at the end of the game wins. In solo mode (described here), you need more gold than the heinous Countess, the last living relative of a tyrannical monarchy that used to rule and who is still committed to oppressing the villagers.

To set up the game, lay out the 6 starter villagers in a row that will be referred to as “the road.” Above the road, create stacks of cards so that there are twice as many cards as people (in solo mode, 5 cards per stack). The First Market Phase card (stage 1 scoring) goes under the second stack and the Second Market Phase card (end game scoring) goes under the 6th stack. Each player gets a Founder villager card to start play and 5 cards in their hand.

Play proceeds over several rounds of drafting (choosing face-up and face-down villagers from the road and stacks) and building (placing villagers in your village). Players draft a minimum of 2 villagers and one additional for each food symbol they have in their village, up to a maximum of 5 villagers. To update the road after everyone is done drafting, villagers are discarded from the face-up cards if necessary (depending on number of players, gold is used in particular ways and cards discarded in particular ways based on gold status), and then replaced. There is discrepancy in the instruction manual as to whether these cards are replaced from the deck (the “reserve” or from the stacks, beginning with the left-most stack (i.e., stack #1).

Building works the same way, with players placing between 2 and 5 villagers in their village.  Players may discard up to 3 cards from their hand each build phase to add basic villagers to their hand (Hayer, Lumberjack Miner), who do not count toward the build limit. Villagers may form production chains, where prior cards are needed to play current cards (e.g., the Carpenter card requires a Lumberjack). Cards may also require other cards to “unlock” them. Players with the particular unlocking card are paid gold either by the bank or other players, depending on who needs the unlocking card (if you need it and have it, the bank pays you. If you need it but someone else has it, you pay them. If you have it and someone else needs it, they pay you).

The Countess is simulated by a marker card and two decks of event cards. When you draft a villager, you also place a face-up villager into the Countess’ village. Because she’s evil, she doesn’t pay attention to padlocked villagers or production chains — every villager counts separately. Mind you, if the Countess has an unlocking card you need, you still have to pay her. She just never pays you. The build phase is the same in solo mode as it is for multi-player mode.

After the build phase, there is an event phase in which you resolve events from two event decks (Summer before the First Market Phase, Winter afterwards until the end of the game). You start the game with one event card face up. After the first turn, the number of event cards you play is determined by the amount of gold shown on your villagers’ cards. Event cards are discarded as they are resolved. When all events are resolved, the Countess receives an extra villager from the deck. Market phases are resolved after event phases.

In solo mode, players are given the Joker, who can be used once to immediately discard an event.

Color commentary: In general, I don’t know how I feel about literally playing two roles, even though the Countess has extremely simplified mechanics. You’re still keeping track of two hands.

I definitely played it supremely incorrectly on the first try by taking cards from the right-most stack instead of the left-most to replace face-up cards, which seemed like a weird dynamic at the time because it meant that the 2nd Market Phase card was revealed long before the First Market Phase card. Nonetheless, I clearly can’t routinely keep left and right straight, so even though it seemed almost certainly wrong, I couldn’t figure out what I was doing wrong. It’s also unclear how to keep cards in your hand to be able to trade for basic villagers (drafting but not building with particular villagers, maybe? Because you put the villagers back in the stacks, there’s always a chance you’ll get them again, and it’s guaranteed if you’re playing solo). I just kept drawing cards from the deck as necessary to make sure I always had 5 (the starting hand size), because I also sometimes built villagers from my hand. The instruction manual is contradictory on how to replace face-up cards, so I just picked the first set of rules and stuck with it. I prefer replacing road cards from the stacks because I am risk-averse and am not keen on drawing the face-down cards, and if you keep replacing face-up cards from the deck, it will take a very long time before you take anything from the stacks, and even then you could still mostly force them to be revealed before you take them. The event cards (or at least the summer cards, because I never actually played any turns after resolving the First Market Phase because the Second Market Phase card has already been revealed because I was doing it wrong) were interesting because they often gave the Countess cold before the Market Phases. It was a very fun game on the first play-through, even with its unresolved questions.

I played (more) correctly the second time and lost badly, in large part because the Countess doesn’t keep production chains, so a part of cards that has a card worth 20 coins build on a card worth 10 coins for me (so 20 coins) gives her 30 coins. And I made some strategic blunders in allocating cards to the Countess, so she got that combination of cards early on, giving her those 30 coins in both Market Phases, which in itself basically guaranteed her victory. The game was still fun, though I still have questions about replacing the road and keeping cards in your hand. And I also forgot to switch to winter events after the first Market Phase. I did eventually, but it took another couple turns. And the cards were not different enough in premise to make up for the additional, and I would argue unnecessary, complication of changing decks.

It was fun as a solo game, but I don’t know that I can see myself replaying it much, unlike Bottom of the 9th or Pulp Detective, say. There’s a lot to keep track of when you’re basically playing two different players, so I’m definitely interested in playing against M. Draft limits may be different between players in a multi-player game, whereas the Countess always drafts the same number of cards as you. Also, it wouldn’t have been enough to change the outcome, but not once did I remember to pay myself from the bank when I played padlocked villagers who were unlocked by other villagers I had. I did once remember to pay the bank when I needed an unlocking villager neither I nor the Countess had. What a sucker.

Thoughts M might have had if he had played: Solo mode is definitely too complicated with playing two characters and keeping track of event cards and changing event decks partway through the game. TOO. COMPLICATED. The artwork is great, though. It’s fairly simple, but that just makes it better. The cards have a lot of information without being overcrowded. And the box has placeholders that allow you to organize everything systematically so it’s easy to unpack to play again (Petra here: ok. I don’t know if M would really comment on this. But the organization made me super happy. You can even set aside the cards you need for 4-5 player games, which is nice because we will probably never need them and it’s nice to not have to keep a perpetual eye out for them).

I do think there’s an interesting dynamic where taking cards from the stacks introduces more uncertainty for your own hand, but gives you greater control over what you give the Countess (since she always receives face-up cards), and may also allow you to eventually discard some high-value cards (like the 10 and 20 coin cards) that you can’t use but also don’t want her to have.

I think the game is simpler in its multi-player version, and I’m interested in playing that, but probably never the solo mode.