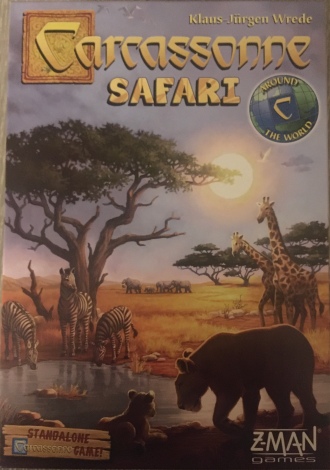 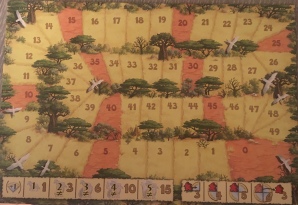 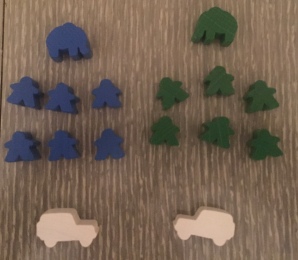 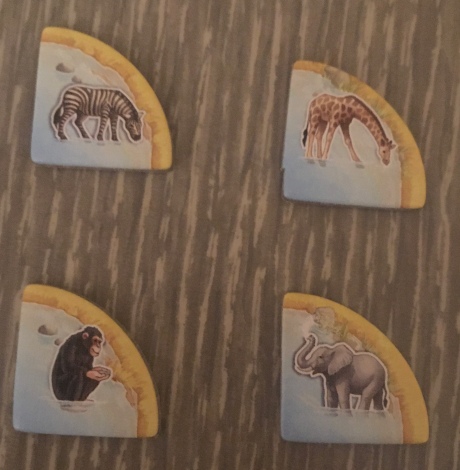 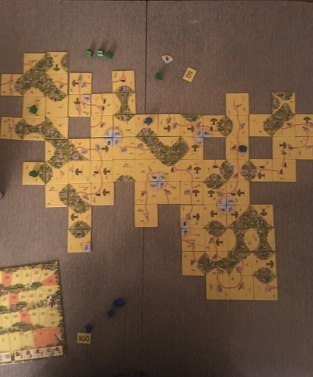 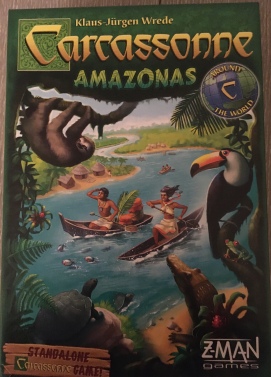 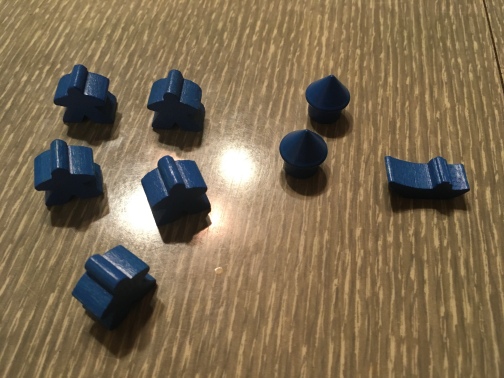 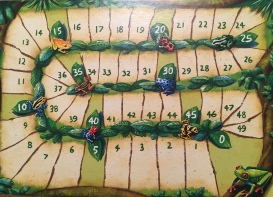 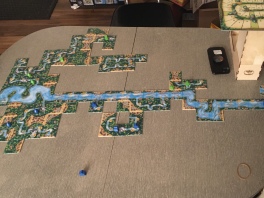 Gist of the game: Players take turns placing tiles adjacent to existing tiles and placing meeples to earn points both along the way and at the end of the game. The player with the most points wins.

In the original, tiles have cities, roads, monasteries, and grass. In Safari, tiles feature bush, trails, baobab trees, and savanna. In Amazonas, tiles have the Amazon, tributaries, villages, and jungle. In all cases, tiles you place must have edges that match the features of the tiles you’re placing them next to (e.g., city to city, savanna to savanna, jungle to jungle).

Each of the standalone versions seem to have some extra little dynamic. Safari lets you construct watering holes, though the baobab trees function largely like monasteries in the original. You don’t score it until you get all 8 surrounding tiles, and then you get the “prize”: 2 more watering hole tiles, rather than points (in the original, monasteries score 9 points — one for the monastery itself and 8 for the surrounding tiles). Amazonas adds the Amazon River, which has caimans and piranhas that you use for immediate scoring when the tiles are placed, but also little boats on the river that you move whenever a boat icon appears on a tributary you have a meeple on or whenever you don’t place a meeple on a tile on your turn. More on this below.

By placing meeples strategically, players can earn points for cities, roads, and monasteries (original); bush, trails, baobab trees, and watering holes (Safari), and tributaries, villages, and jungle (Amazonas). These score upon completing during the game itself, allowing players to get their meeples back to be placed again. At the end of the game, incomplete features are also scored.

Color commentary: We played Safari first, and it didn’t go terribly well. M was overwhelmed by the terminology and the mechanics of meeple placement and scoring, and that was without playing with the ranger, which I couldn’t figure out quickly and we opted to do without. Safari also comes with an elephant meeple! But it was only used for the scoreboard, which was really disappointing.

Playing the original was much more successful, though, and thoroughly enjoyable. The original version was one of the first games I learned to play attending board game nights when we moved to Kentucky, and it holds a fond place in my heart because I really, really liked it, but didn’t yet know that tile laying games were an entire genre of game (that may be among my favorite genres).

Amazonas is not for the faint of table. it has more tiles (and some bigger tiles) than the others, and because of the vagaries of the river, ends up pretty sprawling (~4 feet. We probably should have put the leaf in our table for it). It also felt less enjoyable than the others, though I’m having a hard time rationalizing why. The expansive nature of the game made it harder to know when/where to place meeples. It was also hard to remember to move the boats down the river when not placing a meeple. Moving the boat functionally operates as a counter, which we are notoriously lousy at remembering. We were also tied on the river a lot, so didn’t really benefit from the river scoring in-game. Though on further consideration, there might have been fewer ties, but since I didn’t place meeples on the Amazon tiles, I should have advanced my boat. I probably should have done that before scoring the river, so I suppose I would have scored many more points than I did, because I also had a spate of 5 or 6 consecutive river tiles. Placing little hut meeples in the jungle areas rather than people meeples was kind of cute, at least.

In summary, I love the original, and am excited about exploring some of the original expansions that come in the Big Box M got me as a gift a couple years ago for my birthday now that he knows how to play, too. The standalones can be fun, but it seems like there may be variation in just how enjoyable they are.

M’s thoughts on the game: There’s a lot of randomness to it, and I haven’t been able to think of an overarching strategy so far.

(P here: At this point, M also mentioned something about counting tiles, in the spirit of counting cards in poker or blackjack, which seems like it’s taking the game a little too seriously, so we’ll just move on).

(P here again: He has reiterated that knowing all the possible tiles and being able to check off what’s been used and what’s still left might be the smartest strategy, and that blackjack players may especially enjoy the game.

Toward the end of the game, it’s better to focus on setting yourself up for end-of-game points for incomplete features. There is a strategic use of meeples early on to ensure you get them back soon enough to make reasonable use of them again, but it’s also hard to know how quickly you’ll be able to close a city, for example. Toward the end of the game, you definitely want all your meeples out there earning for you. In this case, monasteries might be a way to go, especially if you can build them in areas where they’re already partially surrounded.