Design a site like this with WordPress.com
Get started
Skip to content
Petra Hendrickson Uncategorized May 10, 2020May 10, 2020 6 Minutes 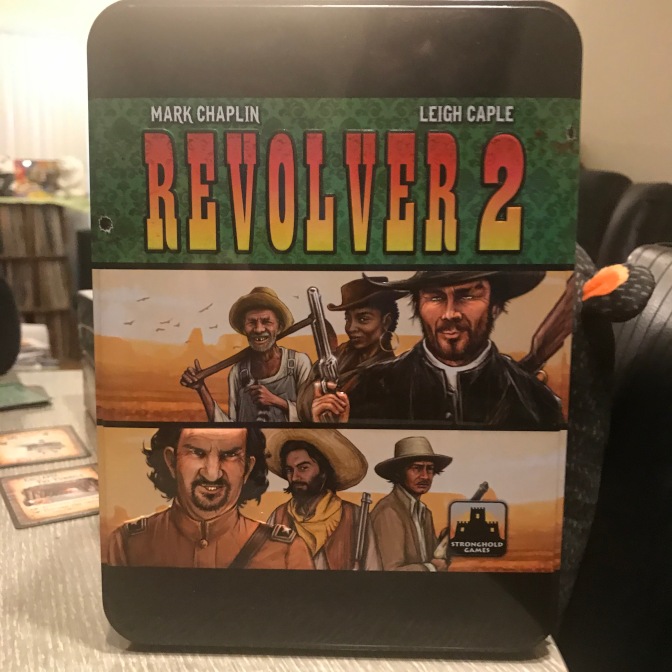 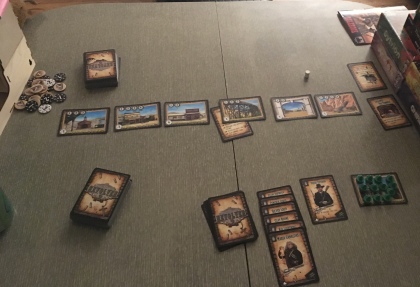 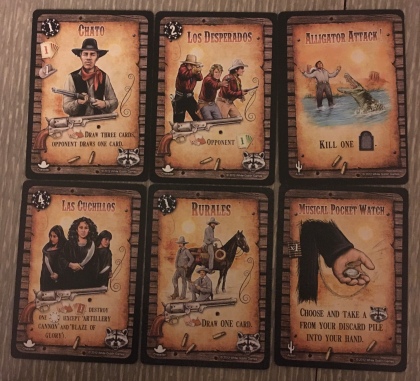 Gist of the game: It’s 1894, and the residents of Malpaso face the possibility of a raid by General Mapache and his gang of outlaws. To help protect against any such raid, the villagers turn to Padre Esteban (actual priestly status is unknown) and his hired gunfighters. Money for the guardians is obtained through a poker tournament outside of town. After the tournament, Esteban and the guardians cross the Los Quantos Bridge back to the village, though they are being followed by Mapache and his raiders. When the raiders arrive at the newly fortified village, an epic battle ensues, culminating at the Abandoned Silver Mine. The Mexican Army is en route, but it’s unclear whether they will be able to arrive in time to prevent the massacre of everyone in the village.

Each player takes a role, either of General Mapache or Padre Esteban and the guardians (hereafter referred to as Malpaso). For the Mapache player to win, they must kill all of the guardians. The Malpaso player can win in two ways: if Padre Esteban survives the last turn at the Abandoned Silver Mine, or if they remove all the tokens from the Mexican Army card, heralding the arrival of the Mexican Army and the rescue of the village.

Play proceeds through certain events, like the poker tournament, 3 battlefields determined by who wins the poker tournament, the Los Quantos Bridge, Malpaso (the village), and the Abandoned Silver Mine. There are also additional cards that accompany some of these battlefields (additional guardians can be obtained at the first 3 battlefields, “Dynamite the Bridge” for Los Quantos Bridge, and “Gatling Gun” and “Collapse the Tunnels” for the Abandoned Silver Mine).

The first 3 battlefield cards are determined by which player wins the poker tournament. The poker tournament can also confer additional advantages on players based on the cards they play, regardless of whether they win.

The Malpaso player starts with 7 guardian cards (6 + Padre Esteban), and can obtain up to 12 more during the first 3 battlefields. Each battlefields has a specified number of turns. On the first three battlefields, each turn is accompanied by additional guardians. Some of these turns are optional, with the Malpaso player determining whether to use them or not.

The game proceeds in turns, with each player taking their entire turn before passing to the 2nd player. The Malpaso player starts the game. Turns are divided into 4 phases: a) advance the turn marker (Malpaso player only), b) draw 2 cards, c) play cards, and d) attack (Mapache player only). When drawing cards, there is no limit to hand size.

To play cards, players may have to pay a cost, which is done by discarding the indicated number of cards from their hand. There are 3 types of cards: firepower cards (played on one’s own side of the battlefield), blocking cards (played on one’s opponent’s side of the battlefield), and effect cards that are discarded once the effect is taken immediately.

The Malpaso player can play a maximum of 3 firepower cards. Mapache has no firepower limit, and can also play up to 2 blocking cards on the Malpaso’s side of the battlefield, which count toward the Malpaso player’s card limit. The Guardians player can still play effects cards even if they’ve reached their 3 battlefield card limit. Some cards also have bullets (Mapache) or powder kegs (Malpaso) that can be discarded at particular battlefields for certain outcomes (blowing up the bridge at Los Quantos Bridge and collapsing the tunnels at the Abandoned Silver Mine for Malpaso, using the Gatling Gun at the Abandoned Silver Mine for Mapache). At the Mine, Mapache can use the Gatling Gun to basically mow down the guardians. They can use the Gatling Gun once for each bandit they have at the Mine, expending a value of 1 ammo for each use to kill an equal number of guardians.

During attack phases of each turn, total firepower is compared: firepower cards for Mapache, and firepower cards + battlefield defense for Malpaso. If Mapache wins, the guardians suffer a casualty. If Malpaso wins, a token is removed from the Mexican Army card.

The game ends when one of the win conditions has been met.

Color commentary: Welcome to the 2nd installment of Old West month! We’ve been putting off playing this game for a long time because opening the box and looking at the components was really intimidating. The fact that there are so many specific components make the set up seem daunting (there are general decks for each player with 62 cards each, 19 guardian cards (7 to start, up to 12 additional obtained at the first 3 battlefields), 9 battlefield cards (though you only play with 6), 3 battlefield-specific cards, 2 poker tournament reference cards and 2 decks of 6 cards for that (though you only play with 5), the Arrival of the Mexican Army card, 14 Mexican Army tokens, 11 extra life tokens, 4 guardian power tokens, and 9 Mapache power tokens. Plus a turn marker.

Actually playing wasn’t that complex though, once you realize that a lot of the cards have very specific purposes at very specific times. We played 2 games, taking turns with each character. In the 1st game I played Mapache, and I played Malpaso in the 2nd game. I won both times, though M put up valiant defenses both times.

Because the poker tournament provides additional effects beyond just the 1st 3 battlefield cards, there’s some strategy as to what cards you play, and whether your goal is to win hands or simply get specific cards out there to gain their effects, since effects are gained regardless of who wins.

I don’t think it’s especially likely that the game will ever be won by removing all the tokens from the Mexican Army cards. While Malpaso can draw cards that remove tokens, and some guardians remove tokens, Mapache can add tokens, and other guardians add tokens when they are killed. The game starts with 12. In my game as Malpaso, I pretty aggressively went after the tokens, but between the various additions, I ended up with I think 7 left, although I know I removed more than that over the course of the game. Stupid Mapache and my dead guardians kept adding them back.

I think I had sufficient cards the first game, as Mapache, but I was perpetually hand poor as Malpaso, having to make gut-wrenching decisions about what to discard based on cards M played or when some of my guardians were killed. M seemed to have a glut of cards practically the entire game until the very end, when he almost certainly could have used more options.

The Gatling Gun at the Mine can be a huge boon for Mapache. When I played Mapache, I had like 5 bandits at the battlefield and a whole bunch of ammo, so I spent a couple of turns just absolutely decimating the guardians. This was made easier by the fact that M had no powder kegs, and couldn’t collapse the tunnels When M was Mapache, he was still able to do a fair amount of damage with the Gun, but I was able to collapse the tunnels once, taking out 4 of his bandits, and then place a limit on the total number of bandits he could have at the battlefield to 2, at which point he also had no ammo left and couldn’t beat my defense count of 14 (2 Artillery Cannons and worth 6 points each and 2 defense points from the Mine itself). The good Padre and two of his fellow gunmen survived the showdown, no thanks to the Mexican Army, which had gotten stuck in mud and in an avalanche at various points in the game.

Thoughts from M: Most people don’t know this, but I was once a feared and fearsome gunfighter who murdered hundreds of men without regard to their race, creed, color, tribal affiliation, gender, age, or whether I was being pad to kill them. It was a good life till Will Kane showed up (Petra here: we had a long, painful debate about this and whether it would be necessary, but since I’m the one actually typing this up, I would like to clarify that Will Kane was Gary Cooper’s character in High Noon, a classic 1950s Western that was an allegory for the McCarthy Era, and possibly Everyman, which may or may not have made it a double allegory?)

Anyway, I thought this previous experience would give me an advantage, but it didn’t. Alas, after I lost the game as Malpaso, Petra did not think that a duel would be an appropriate way to social distance.

Still, the game reminded me of my earlier, better, days and was lots of fun. I suspect the game will often come down to a big shootout at the Abandoned Mine, which is lots of fun, but perhaps there is a better strategy that involves more incremental victories and a more gradual but sustained wearing down of the guardians.

Addendum based on more experience: When we played the 2nd time, I was saving up for a big showdown at the Mind, but it didn’t work out. It might have otherwise, but Petra had a super lucky hand (Petra here: which was in itself lucky, because I used 2 of the 3 cards in my hand to collapse the tunnels, and then one of the 2 cards I drew on the next turn limited M’s battlefield size, leaving me with 2 cards and no other options, as M had limited my own battlefield size to 2 cards). So the Gatling Gun did work wonders, knocking out most of her remaining guardians, but I only got to use it once because of my own unlucky hand.