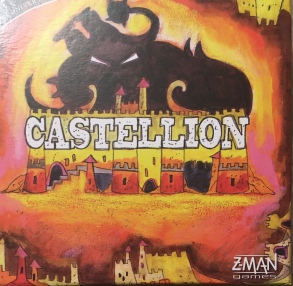 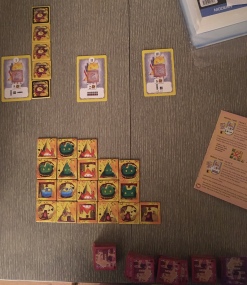 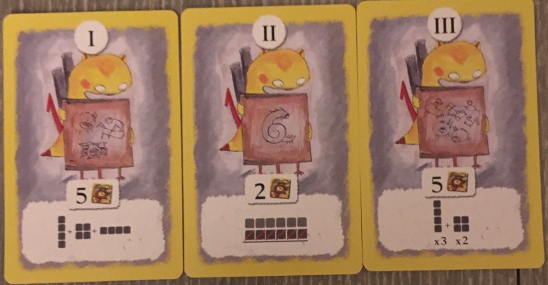 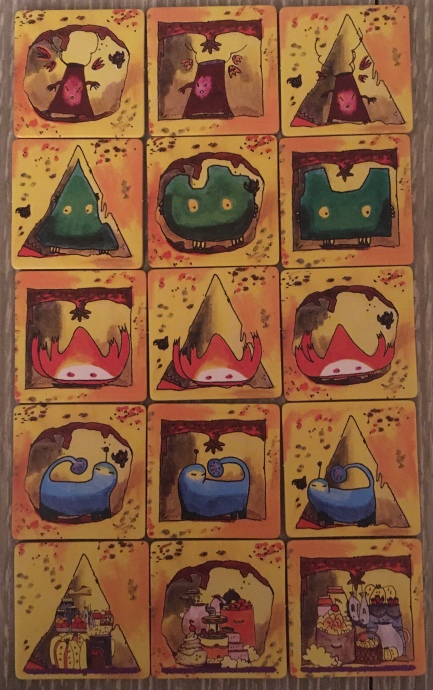 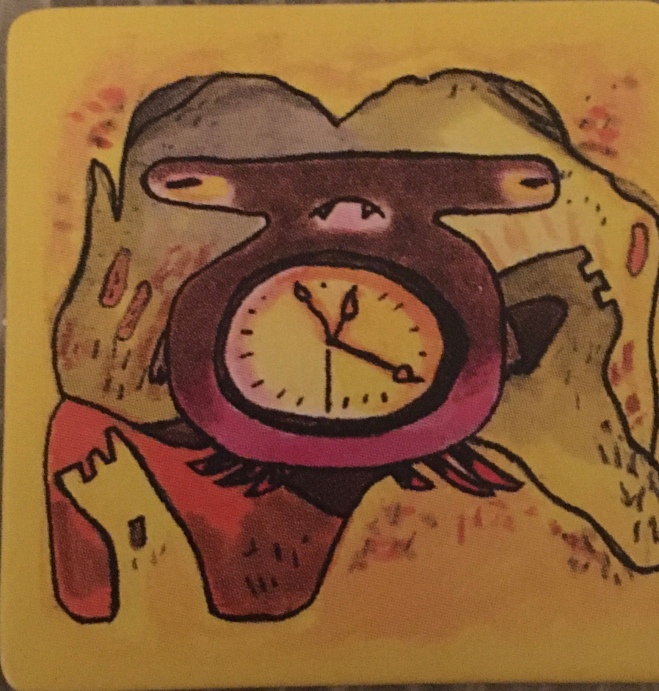 Gist of the game: You are building a castle. To win the game, your castle must successfully overcome 3 ordeals, ensuring that you have the necessary defense fortifications and a sturdy foundation for each ordeal.

To set up the game, place 1 each of the 3 ordeal levels (Level 1, Level 2, and Level 3) face-up on the table. Each ordeal card specifies what defensive fortifications you need/what happens to your foundation and the number of traitors that will trigger the ordeal. Shuffle the two sets of dream tiles separately: 72 regular tiles, which contain 12 traitors and 12 “safe” tiles, which contain no traitors.

On each turn, draw a tile from one of the two sets. If it is a defender (i.e., non-traitor), you may place it or discard it. If the tile is a traitor, you must place it next to the ordeal card you are working toward. Once you accumulate the specified number of traitors, or you complete the 6×6 grid, you will trigger the ordeal.

To place a defender tile, you must follow 4 rules. After the 1st tile is placed, tiles must be orthogonally (not diagonally) adjacent to each other. With the exception of the bottom row, tiles must be placed above another tile (no dangling tiles), and tiles depicting the same shape (circle, square, triangle) cannot be placed next to each other. Finally, the castle may not exceed a 6×6 grid. To discard a defender tile, simply place it face-up in the discard pile.

For the second ordeal, you destroy your current foundation so that the 2nd row is now the foundation. If this new foundation is not complete, you lose. If the new foundation has 6 tiles, you proceed.

The 3rd ordeal is similar to the 1st. You must have the required defensive formations and a complete foundation to win.

There are three levels of difficulty: introductory, base, and advanced. With the base and advanced levels, new defender features come into play, like letting you move tiles around within your castle and being able to violate some of the defender placement rules.

Color commentary: This is a quick and fun game, though I would like to renew my mild complaint about games that don’t have a single end point that you work toward and then determine victory. Nautilion was similar, where I would realize halfway through the tile path that I could no longer win. In Castellion, I never even survived the 1st ordeal, which makes the whole thing very anti-climatic. This meant that the projected 30 minute play time was really more like 5-10 minutes, depending on how quickly I drew traitors. It was still fun, but simultaneously slightly disappointing.

I lost on the 1st ordeal in the introductory level. I had a complete foundation and 2 of 3 defensive formations.

Because I understood the mechanics of the game, for the 2nd attempt I moved up to the base cards. I also lost on the 1st ordeal with 3/4 of each of the 3 defensive formations and 5/6 of my foundation complete. Using some of the defender abilities triggered by a discard might have helped, but I’m not convinced of that. Probably I should have started taking from the safe pile after I drew the next-to-last traitor card.

The game is fairly portable: you need room for up to a 6″x6″ grid, 3 cards and a row for traitor tiles next to each, two stacks of tiles, and a discard pile.

Thoughts M might have had if he had played: I think there’s definitely strategy here, like when to draw from the safe pile, and where to try to position your defensive formations, but so much of the game is also simply luck, based on what tiles you draw. Perhaps discarding also becomes strategically advantageous, to ensure that you’re not clogging up your castle with defenders that aren’t actually advancing either your foundation or your defensive formations. Also, since the 2nd ordeal always necessitates destroying your foundations, it seems like you should plan for formations to only start in the 2nd row, or a 1×4 formation that you need for the 1st ordeal but not the 3rd.

On further reflection, there certainly is an element of luck in this game, but there’s also plenty of room for strategy, especially in the base and advanced levels, when the defenders can do more, and sometimes do better, when they are discarded rather than placed.