Design a site like this with WordPress.com
Get started
Skip to content
Petra Hendrickson Uncategorized November 10, 2019 2 Minutes 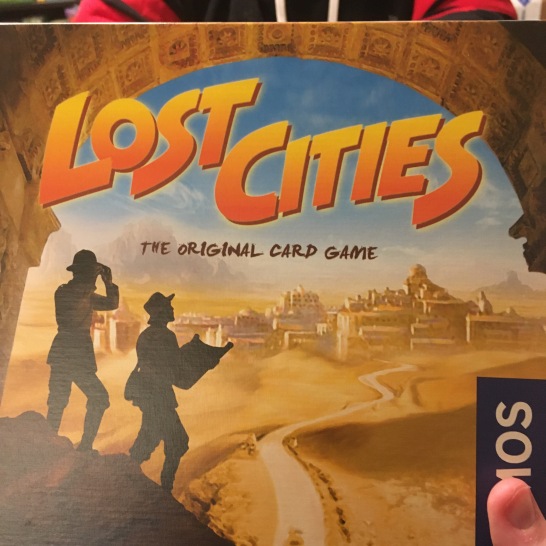 Gist of the game: You’re an explorer, creating routes along 5 different expeditions: tundra (white), underwater (blue), desert (yellow), jungle (green), and volcano (red). You can bet on the success of your expedition by playing wager cards, which makes your triumphs more profitable, but your failures more catastrophic. Any expedition you start incurs a cost of 20 points, so the cards you play (numbered 2-10 and played sequentially) need to at least cover the cost of the expedition. On a turn, you play a card or discard a card, and then draw a card, either from an expedition’s discard pile or the draw pile. The game is played over three rounds, but you could easily play more or fewer depending on your time availability and inclination. Each round takes about 10 minutes, so a full game is about 30 minutes.

Color commentary: This game is an oldie but nearly-forgotten goody; it’s one of the first game M and I played, back in our Lansing days, when all we had for a playing platform was our bed (I mean, we had a table, but it was a one-bedroom apartment and it was serving other purposes). The wager cards certainly create an interesting dynamic, and make possible the rare scenario in gaming where you can win with a negative number of points. The rules don’t expressly forbid this, so we play with deck checks: information about the number of remaining cards in the draw pile that’s made available to everyone. And by everyone I mean both players, as it is a 2-person only game. Deck checks help you make informed decisions about when you should start dumping cards you already have versus holding out for a lower-value card to build from. Also, as M would probably point out, it helps to adequately explain how scoring works before the game starts, as the scoring process ((sum of expedition points – 20 points for expedition costs) * wager multiplier)=total points) materially affects your strategy and when to settle for a few high-value cards versus trying to build as complete a series of cards as possible with the possibility of a 20-point bonus if you accumulate 8 cards on any expedition (this bonus is added after the initial calculation explained above). The artwork is cool, and the game is enjoyable, but you could also play a slightly modified version with a regular deck of cards (you could use face cards as ascending wagers, and then only have 4 expeditions instead of 5). I think there’s also a more board-intensive version of this game, but it costs more and it came out after we had this version. It seems weird to have more than one version of the same game if the Simpsons or Hello Kitty are not involved, so we’ve just stuck with this one.

M’s thoughts on strategy: (after insisting I take his strategy dictation): One key element of this game is trying to keep an air of mystery about what you have in your hand, as it could affect your opponent’s strategy. If they don’t know you have cards they want, they may go on fruitless expeditions, wasting turns and playing cards they might have otherwise not wished to play. (Petra here: if you don’t know your opponent has the 4, 5, and 6 cards for an expedition and you have 3, 7, 9, and 10, you may waste precious turns hoping for 4, 5, and 6.) So the game is largely the tension between not wanting to run out of turns to play your necessary cards and trying not to play them too early, both because you might eventually get lower-value cards that could help you and because you don’t want to tip your hand to your opponent.