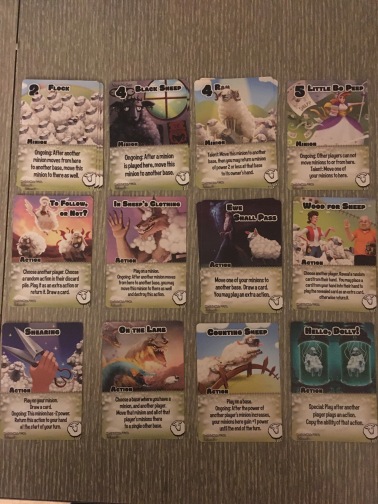 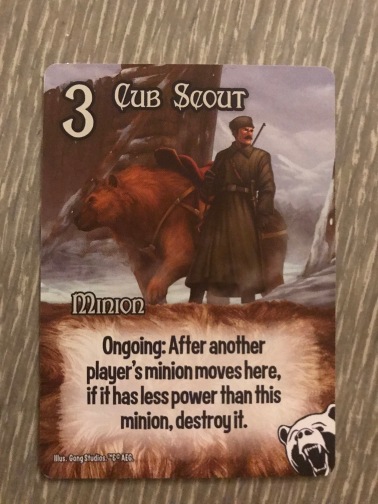 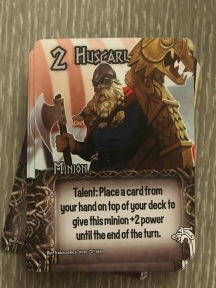 Gist of the game: Your goal is to be the first to accumulate 15 victory points, obtained by collecting bases. You win a base if the minions you place on it are worth more in total than your opponents’ minions. The first, second, and third-place totals all win victory points, albeit in diminishing quantities.

To do all this, you form a deck comprised of 2 factions. Each faction has 20 cards, made up of a mix of minions (with point values that you accrue on bases) and actions.

Start the game with a hand of 5 cards. Throughout the game, you can have no more than 10 cards in your hand at the end of your turn. On your turn, you may play a minion (on a base), an action (which lets you do a variety of things, including affecting the point values of minions, playing more minions, etc.), or one of each. After playing cards, check to see if any bases need to be scored. Each base has a breakpoint: the minimum value of all the minions on the base. The player with the highest value wins the 1st place victory points, the player with the second highest value wins the 2nd place victory points, and the player with the third highest value wins the 3rd place victory points. Some bases (mostly those involving martial arts) may actually award more victory points to the 2nd place winner than the 1st place winner, but that’s uncommon — usually 1st place wins the most points and 3rd place wins the fewest. To win any points, you must have at least one minion on the base. At the end of your turn, draw 2 cards and discard down to 10 total cards in hand if necessary.

Color commentary: We own all but one of the expansions for this game, meaning that we have a gajillion expansions minus 1. I’ll outline what factions we used and what bases we drew for each of our two games (with the expansions they come from in parentheses) and throw in some witty insight as appropriate.

Because the Munchkin version of Smash Up incorporates a lot of elements of the Munchkin card game, this expansion involves things like monsters that get played on bases, and treasures you can win by defeating monsters. However, monsters were confusing (does winning the base automatically involve defeating the monster?) and I don’t think we did it correctly. If monsters didn’t make sense, treasures made even less sense. And I tried reading the instructions surrounding these things, and I still didn’t understand. Maybe we’ll try again some time, maybe not, but for this game we pretty much ignored the monster imperative.

M’s choice of Vikings ended up being quite felicitous, as a number of his action cards involved getting to pillage my deck and take cards from me. This meant that I had to cycle through my deck faster (at least he didn’t get my most valuable minions), twice over the course of the game, while he never had to shuffle his discard pile back in. I think he ended up with about half a dozen of my cards.

Note: Expansions we didn’t utilize at all in these two games include The Obligatory Cthulu Expansion and Monster Smash.

So what I’m learning is that while I might have the upper hand within the first 24 hours of playing, giving M roughly a year to unconsciously percolate over a game (we first played this at a board game convention in April 2019…the same one where we played Build a Cure, as it happens) is absolutely disastrous for me. The only reason I had a sporting chance is because after a temper tantrum, M pointed out a way for me to win a base. Am I proud of this temper tantrum? No. Did I clearly marry a good man? Yes, yes I did. Also, please note that this kindness was largely symbolic, as he had enough of a lead at that point that he was going to win with the next base, especially since he got to move 3 of his minions straight from this base to another after it was scored, giving him a big advantage on accruing minion points.

So I have a few thoughts about the game in general. The first is that I’m not sure if there’s really a limit on the number of players once you start using a bunch of expansions. The original game comes with 8 factions, which places the upper limit on 4 players since each player needs 2 factions. But each expansion pack has 4 more factions, which in theory allows for up to 2 more players per expansion. Do I think this would be unwieldy? Yes I do. Do I think it could still be interesting, especially as people would probably segment off into smaller groups to compete for bases rather than, say, 7 people trying to compete for the same one? Yes I do. If we actually had friends (I could blame the lack of ability to do this on physical distancing in the time of pandemic, but let’s be honest; there’s a deeper underlying problem here), this might be something I would want to investigate at some point.

The other thing is that this game has a ton of replay potential. If I did my math correctly, and there’s no guarantee that I did, an individual player has 2,415 possible combinations of factions given the cards we have now (70 factions). That means that for a 2-player game, involving 4 factions, there are 916,895 combinations. Seems like you could be kept busy with a diverse set of cards for quite a while. And when we get the last expansion with the last 4 factions, that’s going to increase even more.

Thoughts from M: Smash Up has some similar fun dynamics to King of Tokyo. It’s a little more complex, since there’s strategy on each turn, and sometimes across turns), but I still find it very relaxing. Especially when Petra isn’t throwing temper tantrums (Petra here: ok, this is actually me inserting this. M is very patient). I think probably a young child could play King of Tokyo without much assistance, but they’d probably be lost in Smash Up. Unless they were the kids from Village of the Damned, and the you have much bigger problems than this game. (Petra here: hooo, where to start. Village of the Damned was the movie on Svengoolie Saturday [March 28] night. We watch Svengoolie on MeTV every Saturday, and really, this is starting to reveal a lot about us as people, so I’ll cut this short and say if you’re interested, you can check out the movie’s IMDB page here).

In the early stages of the game, it may be better not to look at the number of points from winning a base and instead look at the point differential between places.

There’s room for a lot of short- and even medium-term strategy here, which puts it in contrast with Guillotine (Petra here: I promise one day we will actually post a blog about this game), where there’s nearly a 100% chance that outside of collecting Palace Guards, any strategy you have will be overturned almost immediately. In Smash Up, I feel like you can actually execute strategies, and that a good, solid strategy at turn t will probably be a good strategy at turn t+3, for example. Also, getting out to an early lead, and then maintaining it, in this game is very beneficial as you can then concentrate on boosting your totals as opposed to worrying about your opponent(s) increasing their total(s).