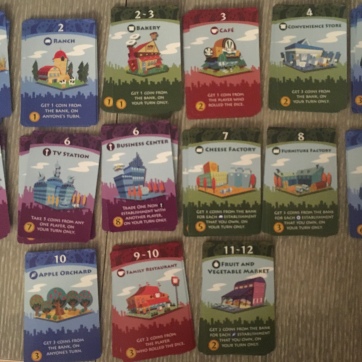 Gist of the game: You’re the mayor of a developing town. You can invest in various industries and reap the benefits of doing so, which will help you develop your city even further by providing you the capital to build key landmarks.

Each player begins the game with a wheat field (pays out 1 one coin when a 1 is rolled on anyone’s turn) and a bakery (pays out 1 coin when a 2 or 3 is rolled on your turn only) and 3 coins. On each turn, you roll one or two dice (depending on whether you’ve built your train station), earn income from the roll, and build industries or landmarks (1 total building project per turn). The first player to build a radio tower, amusement park, shopping mall, and train station wins.

Color commentary: Despite only having played it for the first time in 2018, this was one of the first new-generation board games we purchased for our collection, so there’s a lot of sentimentality attached, especially as M bought me the Deluxe Edition as a gift.

I don’t like vindictive cards in games like these, which hurt other players rather than thus affirmatively helping yourself at no cost to others (which is also why I refuse to play with the Witch in Dominion), so M and I agreed to forego any of the “6” cards which involved receiving money from other players rather than the bank, as well as the few other cards in the game that involves having the person who rolled the di(c)e paying out. This did open up a coverage gap, as the “6” cards that we did not play with were the only cards available that paid out when you rolled a 6, but it made me happier overall (plus M rolled more 6s than I did, so heh).

I also bought a playmat a couple Black Fridays ago (I think in 2018, a few months after we played for the first time), which made organizing the piles of cards kind of fun, and added a nice aesthetic touch. You’d have to ignore some of the markings (it marks spots by the header indicated the dice roll you need to benefit from the card) on it were you to play with expansion cards, but it would still work, especially since those markings end up covered up.

M won game 1. He had doubles and triples of some cards that gave multiple coins for primary industries, so he was able to get a coin lead that I couldn’t catch up to, and he was able to build his landmarks much more quickly than me.

I won game 2. I worked early on to get as complete of coverage as possible (no “6” cards, but cards covering 1-5 and 7-12), and made steady progress on coin and subsequently landmark accumulation. M says he got behind -which he clarifies to me means I had a lot more properties than him- and left a lot of possible dice rolls uncovered by card values, so he missed a lot of income-generating opportunities. Instead, he acquired 4 “8” card, which gave 3 coins to cards of a particular industry, and he had 3 of those cards, which earned him a whopping 27 coins in one turn. (M here: I figured the only way I was going to win was by getting incredible lucky, so I decided on an area to focus on and hoped for the best.) I only had one landmark left to acquire at this point before I would win, but those 27 coins let him build his most expensive landmark AND have change leftover to work toward his own final landmark. Thankfully, my next roll after this turn was not a 6, and I got the 1 coin I needed to build my last industry. Whew!

When looking on Board Game Geek to see what year Machi Koro was made, I see that there is a version we don’t have: Bright Lights, Big City, which apparently explores Machi Koro’s night life. We do have the legacy game, and I’m real curious how they turned a game like this into a legacy game. The nice thing about the legacy version is that once you complete all the legacy parts, you can infinitely replay the game from that end-point. I think some other legacy games you pretty much throw away when you’re done, which makes my acquisition/series-completionist-oriented heart sad.

Thoughts from M: I like the game a lot. There are strategies you have to commit to, but I don’t think there’s only a single good strategy. If you can do it early in the game, I think it’s probably helpful and wise to have full coverage of dice values, but if you miss that chance early on, being strategic about where you double and triple your efforts based both on absolute payouts and on the likelihood of potential dice outcomes can also provide big payoffs, as evidenced by game 2.